The bad weather ” Kirki ” arrived in Attica . The intense phenomena “hit” the southern suburbs of Athens shortly after 14:00 on Wednesday afternoon. Heavy rains are observed in Nea Smyrni, Piraeus, Korydallos and Moschato. The phenomenon has spread to central Greece, Thessaly and the Cyclades, while from midday it will gradually affect the rest of the Aegean Sea, central and eastern Macedonia and Thrace.The risk of hail is present mainly in the central and southern Aegean Sea and in the afternoon in the eastern Aegean Sea.

South Sea winds will blow locally in various directions up to 8 Beaufort while in the central and southern Aegean Sea will blow southward to 7-8 Beaufort. The effects will be gradually limited to the east and south of the Aegean Sea and Crete until the afternoon. Northwest winds in the Ionian will not exceed 6 Beauforts, while in the Aegean, winds initially changing up to 7 Beauforts will gradually become northerly up to 6 Beauforts. 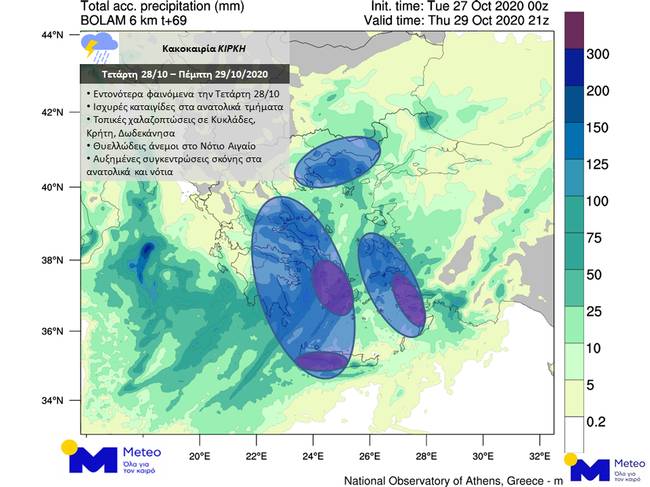 On Thursday, rains and thunderstorms will occur mainly in the south, east and northeast of the mainland, in the Aegean and in Crete.