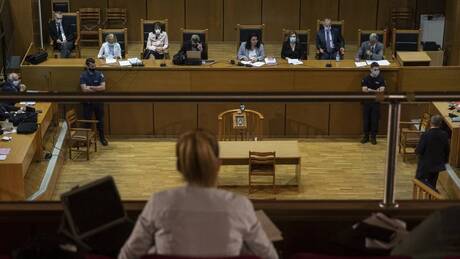 As it became known around 13:30, the head of the criminal organization (Golden Dawn party), Nikos Michaloliakos, the former deputies of Chrysi Avgi, Elias Kasidiaris and Giorgos Germenis as well as the “nuclear chief” of Nikaia, Giorgos Patelis but also the goldsmiths were handed over to the police, Ioannis Kazantzoglou and George Tsakanikas. In addition, one of the perpetrators of Sahzat Lukman’s murder, found guilty of joining the criminal organization, Christos Stergiopoulos appeared before the Supreme Court to be handed over.

In particular, shortly after 1:15 p.m. the court’s decision was announced, on the basis of which the Athens mixed jury of the appeals court decides to imprison the leader of the Golden Dawn criminal organization without suspension. Thus, the head of the criminal organization, Nikos Michaloliakos as well as Elias Kasidiaris, Christos Pappas, Artemis Mattheopoulos, George Germenis, Elias Panagiotaros, Giannis Lagos will be taken to prison.