Twenty-nine human rights and humanitarian aid organizations called on Greek lawmakers to investigate reports of illegal push-backs at the country’s land and sea border with Turkey in an open letter to parliament.

“Greek lawmakers should conduct a swift, efficient, transparent and impartial investigation into the allegations that the Greek Coast Guard, Greek Police and the Greek Army, sometimes in close coordination with masked men in uniform, have been implicated in acts that not only violate but also endange the lives and safety of displaced people, ”the non-governmental organizations said in a letter released Tuesday. 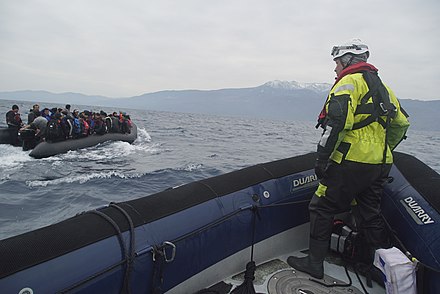 “Any officer found guilty of such unlawful acts, as well as their commanders and officials who have command responsibility over those forces, should be subject to disciplinary and criminal penalties, if any,” the letter said, adding that the investigation should also “seek to establish the identity and relationship of masked men and other unidentified agents with law enforcement and take action to hold them to account.”

“Despite government denials, over the years many witnesses and victims have told us about land and sea push-backs that put the lives of migrants at risk,” said Eva Cosse, Greek researcher at Human Rights Watch, one of the 29 signatories. “Parliament must act now and do all it can to end this potentially deadly practice.”

“Border protection, vitally important in itself, can be in line with international law and human rights standards,” said Antigone Lyberaki, managing director of Solidarity Now, who also signed the letter. “The Greek parliament has both the means and the constitutional obligation to supervise and investigate the alleged violation of international human rights obligations by the Greek state,” Lyberaki added.